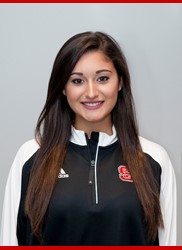 Derya Pekari, a senior on the rifle team, spent part of her summer studying abroad in Valencia, Spain. Pekari is majoring in communication media with a minor in Spanish. She took two Spanish classes at the University of Virginia in Valencia, oral and written expression and a modern Spanish art class. The classes were challenging at times because they were taught by Spanish professors who didn’t speak any English.

When asked about her experience, Pekari said the most memorable part of the trip was bonding with the 30 students from NC State she traveled with. They all lived with host families and were all eager to learn Spanish. At first, she said she didn’t really have a lot in common with her peers other than Spanish, but as time went on she was able to build relationships and connect with everyone. Pekari commented that it was meaningful to focus on being a student and building relationships with students who are not student-athletes. Because she didn’t have practice or competitions, she had free time to meet people and explore.

Pekari and her peers traveled on weekends to surrounding countries and were able to take in the European culture. She explained that her Spanish classes at NC State really prepared her to speak the language and gave her the confidence to immerse herself in the culture. Pekari’s family just moved to Naples, Italy and she is excited to see if her Spanish will help her with Italian.

Derya believes her experience abroad is one of the best she’s had academically at NC State. She said it was such a cool experience to share with other NC State students: “We all got so close and even started a group chat and group Snapchat. We came from very different backgrounds and were forced into a situation where we were dependent on each other.” She recommends studying abroad to anyone who has the opportunity and to “make the most of the four weeks…go out, travel and have fun!”