Ade recapped his journey and gives a glimpse into a different aspect of the life of a student-athlete:

It’s crazy. I never expected myself to be on a study abroad trip, ever. In high school, I laughed at the kids that would go on the weekend retreats. In my mind, those were the “weird kids.” For four years I thought the same about people who go on study abroad trips, not knowing that I was the one that was missing out.

As an athlete, we are often times stuck in a bubble. We surround ourselves with other athletes, people like us, because we feel like they are the only ones that understand us. That might also be my own thinking. Since middle school I have had the same three best friends, rarely opening up to other people because I felt like they didn’t get me. They didn’t get my humor, my drive, my ego. The same thing goes on in college, All of my friends at NC State play some sort of sport until I met 15 other people on June 12. It was hard for me at first, because like I said, I had nothing in common with them. But the one thing that we will always have in common is this trip to Spain.

Segovia has my heart forever, man, honestly. It reminded me of an old country town that no one ever leaves. Not because they don’t want to leave or they feel stuck, but why leave? I had never felt such peace and tranquility in a place before. Surrounded by mountains, watching the sunrise on my morning runs. It is honestly the only place in the world where I will gladly walk 12 miles a day because of the sights and sounds that go on in the place. I loved watching grandparents chasing their grandchildren on the sidewalk on the way to school every morning,  watching the little kids play footy in the park, or seeing the old ladies meet with their friends at their favorite café, sitting outside talking away. So much peace. I felt safe walking 40 minutes back to my house at 4 am leaving the nightlife. It’s a place where I feel like could let my kids run rampant in the streets without a care in the world that they wouldn’t return home. 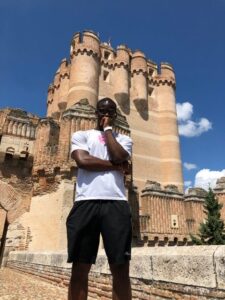 THE CATHEDRALS! I’ve always been a history guy. I’ll never say it out loud because history is a bit nerdy, but I love it. Each cathedral had its own history, its own personalization. I wish I knew a word to describe it because the ones in the dictionary don’t do it justice. You just feel different around the cathedrals. The atmosphere is different. You can feel the identity of the cathedral intertwined in the identity of the city, of the streets, of the people. Religious or not, it moves you, and there’s no denying it.

I wish I started doing study abroad trips when I was a freshman because after going to Segovia there’s an abundance of places I want to go now. I’m glad that I took a chance on this trip, and finally decided to just get out of Raleigh for a bit. I hate new things. Actually, I don’t hate new things, I hate the process of GETTING to that new thing. I eat at the same restaurants because I’m comfortable. I know what I want, and don’t have to take the time to scan the menu and risk disappointment. I’ve had the same friends for the past eight years because I don’t like opening up to new people, new ideas. I’ve denied myself

an active social life with new faces and new opportunities. But for some reason I decided to take a chance and go abroad, immersed in a culture that I barely knew, with people that I just met.  Way out of my comfort zone, but I did it, and I’m glad I did it. I feel better now.