The rain didn’t stop our student-athletes from shining Monday night as the NC State Athletic Department hosted the 2017 Wolfie Awards. Held annually at the end of the spring semester, the Wolfies recognizes student-athletes’ athletic and classroom achievements over the past year. Debbie Antonell, a former Wolfpack women’s basketball student-athlete and current sports broadcaster and analyst, emceed the event. 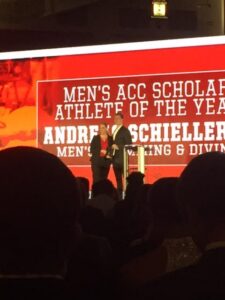 Katie Graham, ASPSA Assistant Dean and Director, presented the ACC Scholar Athlete of the Year to Andreas Schiellerup and Alexia Zevnik, both from swimming and diving. This award recognizes the top male and female scholars who are in their last year of athletic competition, earned a varsity letter in a conference sponsored sport, and have a top 5 GPA in their gender.
Men’s swimming and diving and women’s volleyball each received the Chancellor’s Cup, which recognizes the male and female team with the highest cumulative GPA at the end of the previous semester. The Caterpillar top-ten scholar athletes and the Academic All-Americans were recognized on stage for their academic achievements.

Congratulations to everyone for your continued dedication to athletics and academics. We are so proud of you! Go Pack!